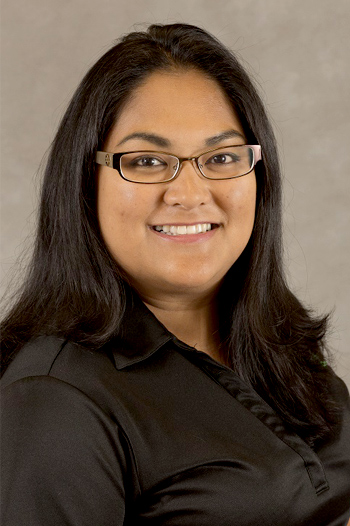 Cindy was born and raised on the island of Lānaʻi and has a passion to serve her community. She has been on the Lānaʻi Chamber of Commerce board since 2015. She served as the Treasurer from 2016 until recently, when she was voted to serve as Chair in 2020.

Cindy is also the Associate Executive Director of the Lānaʻi Community Health Center, and serves as Board Chair of the Lānaʻi Federal Credit Union. Cindy earned her Bachelor’s Degree in Accounting and a Master of Business Administration degree and has over 20 years of experience in accounting.

She is married and has three daughters. 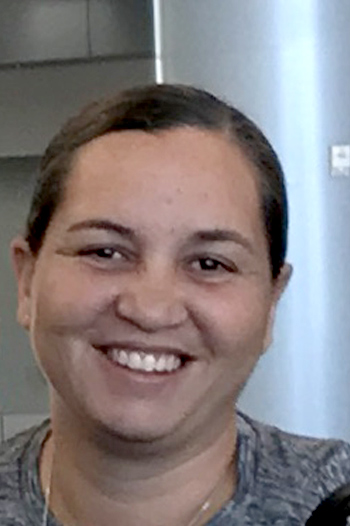 Nikki started her career at LCS as a data entry clerk, and worked in other leadership positions at the Napa and Plantation stores.

In her spare time, she enjoys a good game of softball and is involved with her community on Lānaʻi. 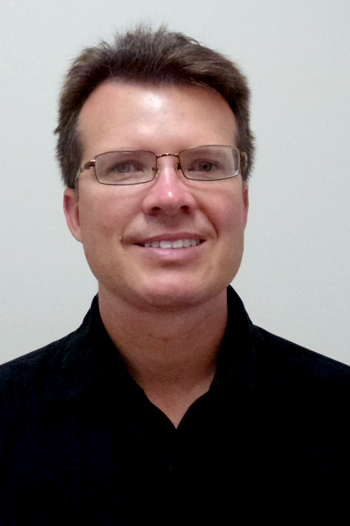 Originally from the Midwest, Bart presently owns and operates a car rental company on Lana’i and Maui. Bart is also licensed as a real estate agent and enjoys representing buyers and sellers here on Lānaʻi.

He brings an analytical mindset supported by accounting experience to the board along with a genuine care for his adopted home of Lānaʻi.

Bart is a member and deacon at Lānaʻi Baptist Church and is married to his amazing wife, Sagisag. They have two boys, currently aged six and two with names of Agape and Adriel. 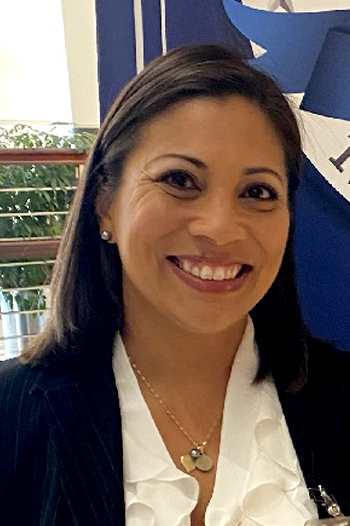 In May of 2015, Charity Texeira Figuerres was honored with the opportunity to assume the role as the CEO/Manager of the Lānaʻi Federal Credit Union.

A fourth-generation island resident and 1995 Lānaʻi High School graduate, Charity served in various capacities prior to her current position. Her tenures included: General Sales Manager for the Lānaʻi Visitors Bureau, Director of Purchasing & Special Projects for the Royal Lahaina Resort on Maui, and Director of Distribution & Logistics for Castle & Cooke Resorts Lānaʻi.

Her positive outlook, charismatic personality and dedication and commitment supports all of her efforts in serving the Lānaʻi community for many more years to come.

In her spare time, Charity enjoys exploring the shorelines fishing and camping with her family. 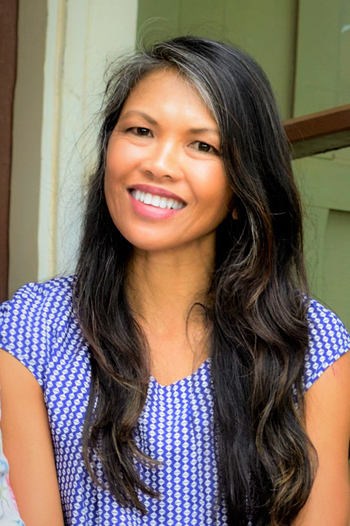 Nelinia Cabiles manages the daily operations of Lāna‘i Today, the newspaper of record of the island of Lāna‘i, including writing editorial content, advertising and sales, and subscriptions.

She holds a Master of Fine Arts degree in Creative Writing; her short stories have appeared in the top literary magazines and anthologies in the U.S.

She has taught at University of Alabama-Tuscaloosa and George Mason University. Before she moved back home to Lāna‘i in October 2019, she taught English at Hawai‘i Community College, Hilo. 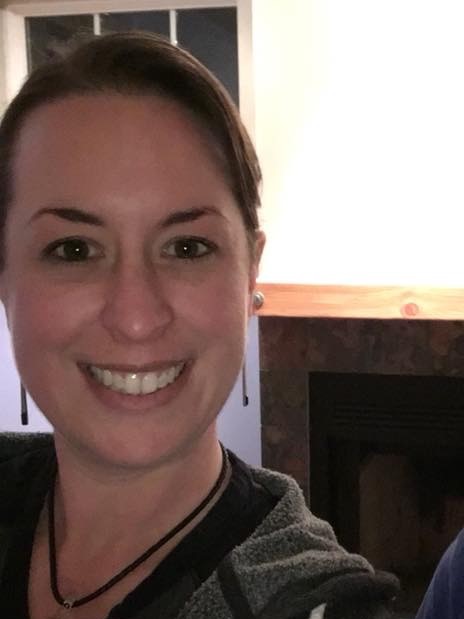 Kathleen (Katie) McQuinn joined the community of Lanai City in early 2020 along with her husband, Caleb Goodwin, and three furbabies: Bruce, Munchkin and Kumo. Katie and Caleb were brought to Lanai by their passion for art, love of the island/island life and dreams of developing a Glass Art program for the community in partnership with the Lanai Art Center. Caleb’s parents moved to the island a few years ago to work at LEHS, so they were blessed to have family to welcome them during the transition.

Throughout the 90’s and early 2000’s in Seattle, in addition to food and beverage jobs and obtaining her degree, she was employed in the aviation and hardware development industries in accounting, project management and product development departments. Katie rounds out her technical and finance background with a BS in Business Management and 25 years of progressive hospitality management; including General Manager of a fine dining restaurant and management of high-end resorts around the greater northwest. Now on Lanai and having been given an opportunity to expand her experiences, in addition to a full time job in conservation, Katie and Caleb are also Co-Directors of the Art Center. Katie hopes her combination of work ethic and technical and soft skills will enable her to give back to this incredible community that has been so welcoming to herself and her family. 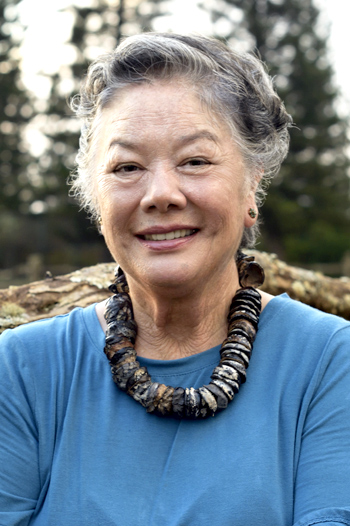 Alberta de Jetley’s family moved to Lānaʻi in 1951. As an adult, she lived on Oahu, Maui and the Big Island. In 2019, she completed her bucket list of exploring every island in Hawaii including Niihau, which she visited in 2019.

After graduation from Lānaʻi High School, Alberta moved to Oahu and worked in the hotel and travel industry.

In 1986, she began her career as a journalist. In December 2008, she became the Publisher and Editor of Lānaʻi Today, a community newspaper. In 2015, she authored a pictorial history of Lānaʻi for Arcadia Publishing Co. titled, Images of America-Lānaʻi.

In 2018, she took on the management of Lānaʻi Taxi and enjoys sharing her knowledge of the island’s history with its passengers. Active in the Lānaʻi community, she’s also served on many county and state-wide organizations.

She is presently the chair of Lānaʻi Academy of Performing Arts, a board member of Na Puʻu Wai Native Hawaiian Health Care, and an advisory board member of the Lānaʻi Chamber of Commerce. In addition, she is campaigning for the Lānaʻi seat on the Maui County Council in the 2020 elections. 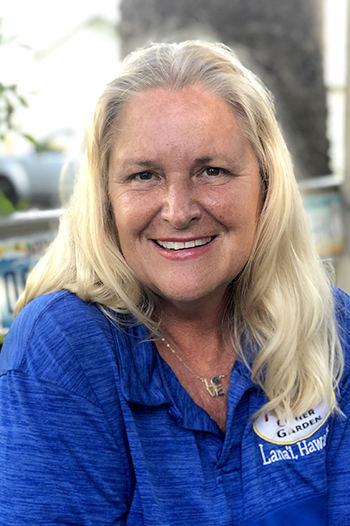 Barbara Lucas, Owner “Pele’s Other Garden”. Born in New Jersey, received my degree in Accounting from Rutgers University. Vacationed on Lānaʻi in 1995 and fell in love with the people and the Island. Moved in July 1996 to start a new adventure and opened a restaurant. I’m still enjoying the adventure.

Active in the Lānaʻi Chamber of Commerce since 2005. In my spare time, I love to travel, go to the beach, read books and meet people. 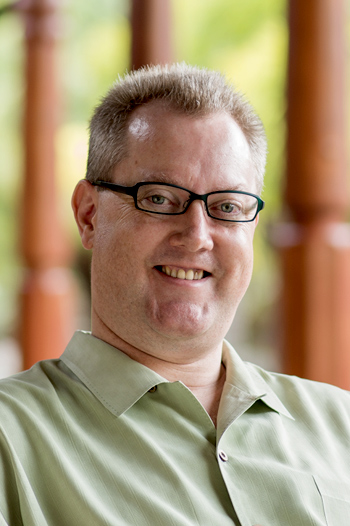 Alastair is a General Manager for the Four Seasons Resorts Lānaʻi. He oversees all day-to-day operations at the luxury beach resort and the first ever Four Seasons wellness resort for at Koele in partnership with Sensei.

Originally from Northern Ireland, Alastair is a 24 year Four Seasons veteran and returned to Lānaʻi following postings in China’s Hangzhou, Langkawi in Malaysia, the Maldives and Seychelles. He opened the Four Seasons properties in Lâna`i following a rebrand under the Four Seasons flag, and resided on island from 2005-2008.

He is joined on Lānaʻi with his wife, Mitsuko, and their 12 year old daughter, Kei, who was born in Hawaii. 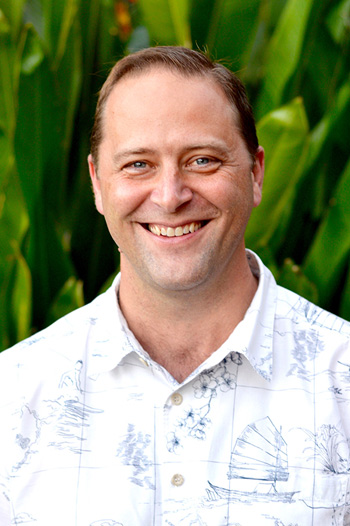 Previously he was Director of Rooms at Four Seasons Hotel London at Park Lane and held a number of senior management positions in diverse locations including the Maldives, Shanghai, Singapore and Austin.

David is joined on Lana’i by his wife Jo. 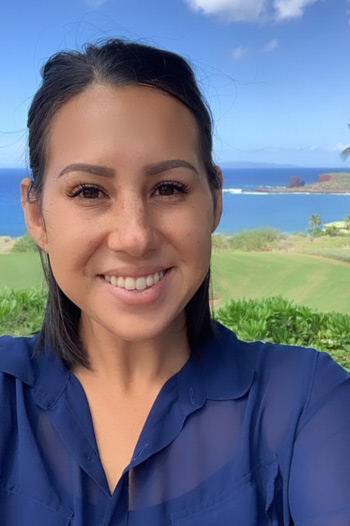 Raised on Lanai since she was three years old, Erin enjoys the island lifestyle. After graduating Lanai High School in 2009, she began her career in hospitality with Four Seasons Resorts. Initially starting off in the Reservations department, she then made her way through other Resort operations including Culinary and Catering & Conference Services. After almost a decade in hospitality, Erin recently joined the Pulama Lanai team in 2019 as the Island Club Manager.

In her free time, Erin loves spending time with her family, cooking, and being outdoors. 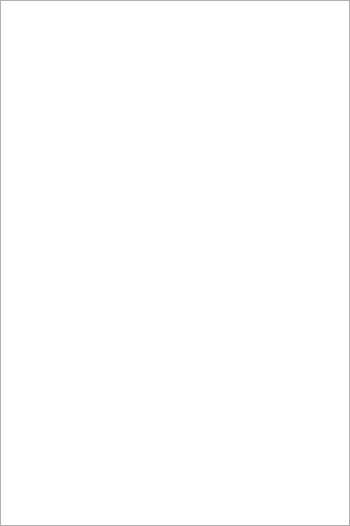